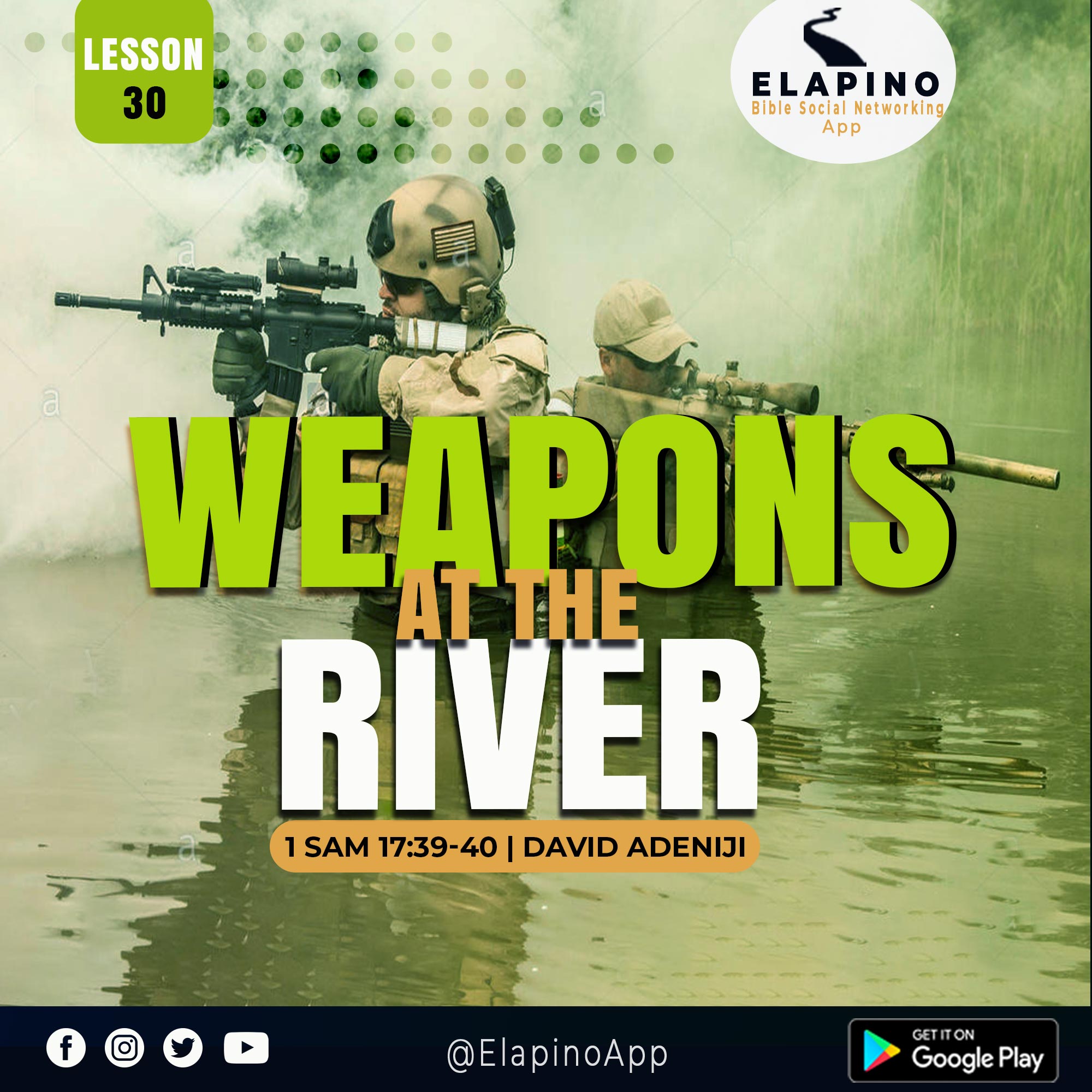 We need to stop seeking physical solutions to spiritual problems or explaining away our spirituality at the mercy of science, diplomacy or political correctness.

The Bible says in 2 Pet 1:3-4, let’s look at that scripture very quickly before we flow into today’s class.

[3]According as his divine power hath given unto us all things that pertain unto life and godliness, through the knowledge of him that hath called us to glory and virtue:

[4]Whereby are given unto us exceeding great and precious promises: that by these ye might be partakers of the divine nature, having escaped the corruption that is in the world through lust.

Now, I’m not saying that physical solutions do not suffice, but I’m saying that you fight a battle from the realm of the spirit. You win it there first. Please don’t get me right, the world may not understand you and really they’re not supposed to understand you always.

Even Jesus says, “they will hate you because they hated me first” – John 15:18

The reason for this admonition is that we are spirits, so when we approach issues, let’s always put God first, and every other concern will fall in place. David refused to confront Goliath with Saul’s armour. Isn’t that surprising. We’re looking today at the example set for us by David. Look at how David interpreted our anchor scripture – If any man thirst, let him come unto me and drink. Here’s what David did at the river. He picked up his weapon of warfare. Hallelujah!

WEAPONS AT THE RIVER

So you see what I’m saying. I’m not saying for examples that the physical solutions should be discarded totally, David still used a sword, but I’m saying that for them to work for you, you must first, embrace God’s leading and wait for a spiritual remedy. For example again, I’m not saying that drugs or medicine won’t work for your healing, but Trust God as your healer and not the drugs. Even where the drugs seem to work for you, It’s because God is involved, otherwise, they won’t work and if you believe God to an extent, you get to a level where you receive your healing without taking drugs. You faith graduates gradually to a level where you don’t even fall I’ll, you’re living in divine health. Hallelujah.

Here’s another example. I’m not saying that the counsel of your psychologist, strategists and advisers should be thrown away, but rather I’m saying that the Holy Spirit’s counsel, leading you directly, should be sought first and obeyed in any matter. That you get direction through his word and through His voice speaking to you. Understand that your are a spirit and let the Holy spirit lead you on what physical counsel you should follow, or who you should take counsel from.

David believed God and killed Goliath with that. Now did he use the physical recommendation from Saul. Yes he did, he still used a sword to cut off Goliath’s head, but that was when he was already dead. And besides, he didn’t use Saul’s own sword he used Goliath’s sword.

Now, had he followed the initial recommendation of Saul, it would have been impossible for him to pick any Stone from the Brook. If he had carried Saul’s armour, he would be too heavy to use it.

We’re not telling you to discard seeking physical solutions totally But Ask God first, then he will tell you what to do and which of the alternatives to choose from.

If you aren’t born again yet, please come to him. Most challenges are solved just by setting aside time to pray. instead of worry, just pray. We have already talked about the river of prayer. Now, we’re telling us to be more attentive and sensitive to the Holy Spirit leading us and every other thing around us will align with the spiritual.

Bible says, 2 Corinthians 10:4-5
[4](For the weapons of our warfare are not carnal, but mighty through God to the pulling down of strong holds;)

[5]Casting down imaginations, and every high thing that exalteth itself against the knowledge of God, and bringing into captivity every thought to the obedience of Christ;

Please flip over to that scripture. Don’t get too familiar to the Word of God, always open the Bible even when you already know what’s there. So are you there? Please read it.

Your strategy is not carnal. You may have read several books on how to do that which you’re doing. But if God drops just one idea into your head as to which customers you should Target in your business and how you should Target them, the results will be tremendous and people will ask you of how you did it. When people ask you, please, don’t take the glory or claim it’s your strategies that worked. Don’t usurp the glory meant for God. Just say, “God helped me, He led me”, before you begin sharing the wisdom he helped you with. And when you do, let the world know it wasn’t your power or might, but His spirit. That’s a quick lesson by the way.

David understood this very clearly. Let’s return to establish this point again. That was how David interpreted the scripture. David went to the river. 1 Sam 17:40 tells us that David picked 5 smooth stones at the Brook. David picked weapons of his warfare. So the river again is the place where you should pick your weapon of warfare, where you should pick your solutions first.

Genesis 2:7 says the Lord God formed man from the dust of the earth. God breathed His spirit into you. You’re a spirit having a soul living in a body.

In 1 Sam 17:40, the Bible says David took his staff in his hand. He already had a staff, but then he still went to the Brook to select smooth stones.

Psalms 36:8
[8]They shall be abundantly satisfied with the fatness of thy house; and thou shalt make them drink of the river of thy pleasures.

So the Brook here is actually the river we’ve been talking about. Oh!, We have a lot to gain at the river. So much is packed at the river. So, Jesus meant business when he said, if any man thirsts, let him come unto me and drink.

At the river, David picked his own weapons of warfare. But the question is, why did he have to pick stones from the Brook and not somewhere else? Here’s the reason.

You see, the stones at the brook are constantly refreshed and washed. In other words, they are always sharpened by the currents of water. You know, as water flows at the river bank, those stones are in constant movement, sharpening themselves, in other words, when you’re always at the river, waiting on God , listening to the spirit, you get Information that is updated and refreshed.

Some people would say, that is what God told me 5 years ago. But are you sure that what God is saying 5 years ago, is what He is still saying now. Are you sure there has not been any update. Of course God is a speaking spirit and He’s always speaking, but what He told you 5 years ago, might have another dimension or updated version for the now.

Of course, God’s word is yea and Amen and He remains the same. If he told you to start a ministry 5 years ago, now, he may be telling you to expand and enlarge your coast. But if you’re holding onto the instruction gotten 5 years ago, without refreshing yourself and your spirit at the river everyday, you won’t get updated versions of that instruction. If you do, you get new directions entirely.

So, the stones at the Brook are in constant movement, sharpening themselves. That’s why David picked his stones from the Brook, instead of picking them elsewhere. The stones he picked had sharp edges, and just one of them was enough to pierce the forehead of Goliath and kill him.

When you’re in constant connection with the river, you are refreshed always. And your weapons of warfare are always sharpened. Please come to the river today if your weapon is appearing blunt. Say Lord, I sharpen my weapon. I refresh my spirit at the river , in the name of Jesus. Come and renew your weapon!

So, once again , We need to stop seeking physical solutions to spiritual problems or explaining away our spirituality at the mercy of science or diplomacy or political correctness.

Your body and soul answers to the spirit.

If you’re saying yes to the spirit’s call, or you haven’t given your life to Jesus, then I want you to come to Him today. Your spirit will report back to God at the end of your race.

Say Lord Jesus, I come to the Brook. Your word says, those who seek you will find you. I repent of my sins and I receive you as my Lord and Savior. From today, I will continue in your ways. My name is written in the book of Life. Thank you Lord. In Jesus name we pray. Amen.

You’re welcome to the Kingdom of God. Read your Bible and pray everyday.

Thank you for following the class till the end. Let’s continue in the next class by the grace of God. Bye for now. Amen.