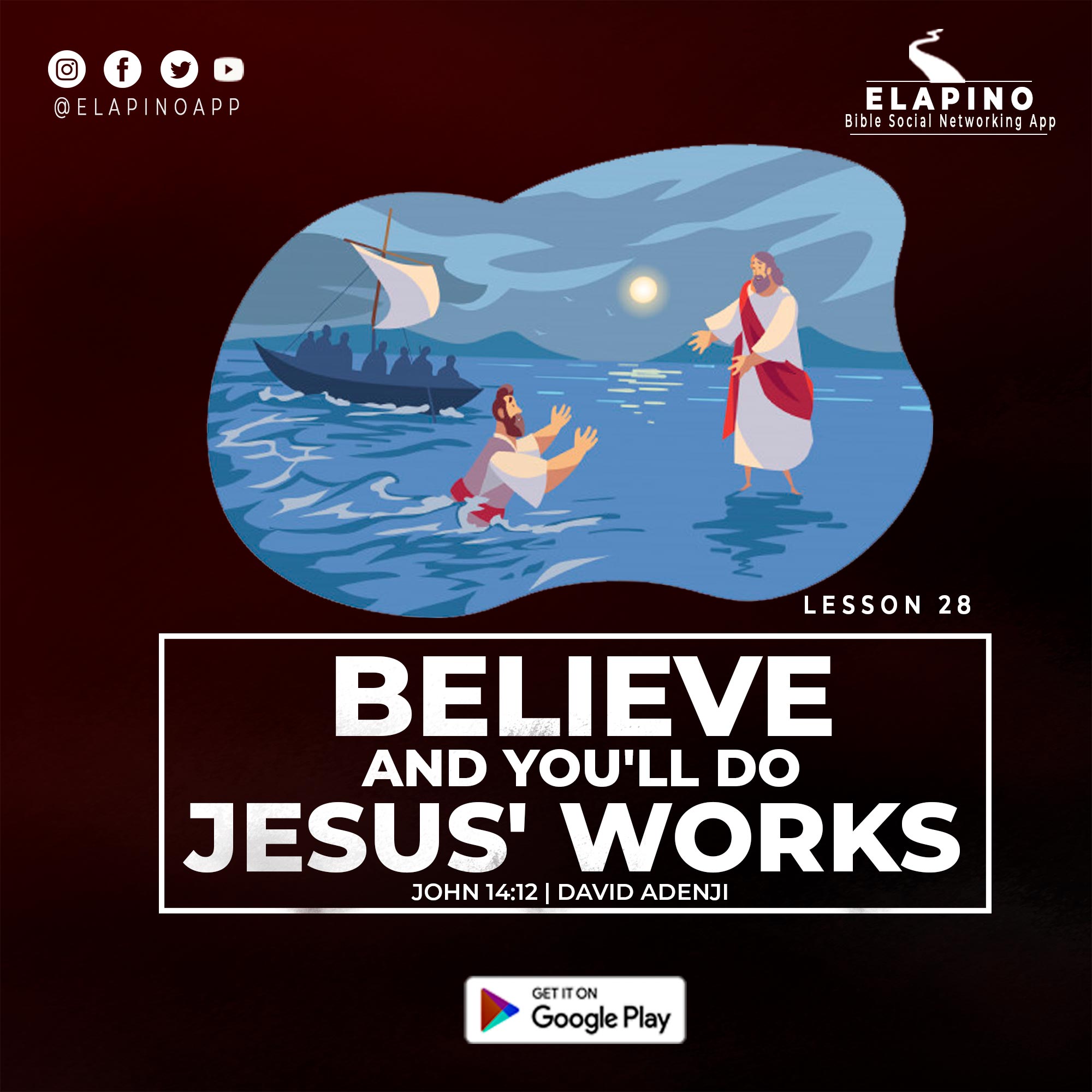 And also, everlasting life, which is not just life without end, but good quality life, Both which we have been given by virtue of our faith, the moment we accept Jesus.

In John 11:21-22, when Martha said, “I KNOW”, Jesus responded with an affirmation of her expectation.

When you invoke that acknowledgement, you’re invoking Everlasting life into that situation. This is just a summary of the last class.

Welcome everyone. This is the 28th Lesson in our series, Come, Drink, and the 3rd lesson in the sub-series, He who believes.

We got this from the twin statement of Jesus in John 7:37-38, which is our main series anchor scripture. In verse 38, Jesus said, He who believes in me, out of his bellies shall flow rivers of living waters. So, we followed that trail of “He who believes”!

In this class, we’re learning that faith brings you responsibility. You cannot claim to believe and remain idle. People who believe, you know by what they do. The Bible says faith is the substance of things hoped for, the evidence of things not seen. By faith, the elders received a good report. Faith is not what you have and go lazy or idle. You know those who have faith by the actions they are committed to.

[12]Verily, verily, I say unto you, He that believeth on me, the works that I do shall he do also; and greater works than these shall he do; because I go unto my Father.

He who believes in me, the works that I do, he will do.

So, if you’re idle and waiting for something to fall on you like fruit from the tree, please wake up and start doing the works of Jesus. Work for him, work in his vineyard, preach his gospel, raise people in the kingdom. He who believes in me, the works that I do, he will do. That’s responsibility, introduced into the faith equation.

It’s not something you just ask and receive, and just like that. You must also get working. Bible says expressly in James 2:26, that faith without works is dead

James 2:26
[26]For as the body without the spirit is dead, so faith without works is dead also.

Take a look at that comparison made in James 2:26. It’s quite interesting. The Bible compared one who has faith but not doing anything to a body that has no spirit in it. May you not be an empty body without life, without spirit. Faith without works is dead. It just won’t work. There’s responsibility introduced into the equation.

You don’t need to define this too much. When you see people who have faith, you will know. People with faith will not sleep and wake u daily without laying their hands on anything.

If you believe, then will do his work. This Means working for his kingdom to grow. That’s one way to look at it. Jesus has licenced us to do the works that he didn’t even do.

So, what are the works that Jesus did? He taught, he peached, he gave, he raised the dead, he rebuked, and he has committed all to us to do even more.

Please flip over to John 9:4, talking about the works. Let’s hear what Jesus Himself said concerning the works.

[2]And his disciples asked him, saying, Master, who did sin, this man, or his parents, that he was born blind?

[3]Jesus answered, Neither hath this man sinned, nor his parents: but that the works of God should be made manifest in him.

[4]I must work the works of him that sent me, while it is day: the night cometh, when no man can work.

In other words, all the challenges and troubles you see around you are ways through which God wants to manifest His works through you. So, don’t run away from every situation and say there’s trouble. The reason why God is bringing you around people who need help is because He wants to use you to prove himself in their lives. The disciples asked Jesus of the reason the man was blind. He told them it was no one’s sin that caused it, but so that the works of God may be manifested through him.

Why do you face challenges here and there? Why do you think you’re passing through all that? It is so that the work of God may be manifested through those situations, it’s for you to rise up and do the works that Jesus did, given those circumstances.

Here’s what Jesus said in verse 4,

I must do the work of Him that sent me while it is day, because when the night comes, no one can work.

So, you do the work while you can. You are very active now, what are you doing for him? How are you showing that you believe? The only way to identify with that power is what you do. The works of God. What you do for Him. It’s not being legalistic. We’re only aligning and identifying with Jesus Christ.

He who believes in me, the works that I did, he will do. Perhaps you need to list out the works that Jesus did. And then ask yourself, which among them am I currently doing. Is it his teaching, preaching, His giving, healing, deliverance, and so one. Which of these works are you doing currently into? Jesus multiplied 5 loaves and 2 fishes to feed thousands of people. How are you multiplying the resources he has given you , to be a blessing to people around you?

If you believe in me, the works that I did, you will do, and even greater works

Then in verse 5, he said

As long as I’m in this world, I’m the light of the world.

That talks about owning the space God has given you. Owning the responsibility he has committed into your hands. As long as I’m a teacher in this class, these children will receive the life of God and learn the right lessons to live an enviable future.

You need to live your life at every point in time as if you are the only one God is looking up to in that situation to do his will. You remember the story of Esther and Mordecai. Mordecai told Esther that she can’t afford to relax because she’s a queen, while her people get condemned to death. And that she should remember that God has raised her for a time like this, to rescue the people from destruction. That she must not fail. May we not fail our generations..

Let’s begin to own whatever responsibility God has placed in our hands, as that is the evidence of our faith.

He who believes in me, the works that I did, he will do. And not just that, greater works, he will do. So, if we do exactly what He did, we’ve not done enough, he has licenced us with an open cheque to do even greater than He did. Hallelujah!

Jesus earthly ministry was just 3 and a half years. But he has given us several more years to do the works that he did. He has committed a lot into our hands. There’s no limit to how far you can go in Him. Greater works! That’s an open cheque. We can do far greater than he did.

He who believes in me, the works that I did, he will do. Greater work, than mine, he will do.

Also remember James 2:26, that says faith without works is dead. Your works will not be dead in Jesus Name. So, don’t just declare that you have faith, when there’s no work to show for it.

Father, we thank you for this class. We believe and we begin to do your works. We will preach, teach, heal, raise the dead, cast out demons, we will bless people, and multiply the resources you gave us, in Jesus name. We will not be idle, you will meet us believing and doing your will in Jesus name. And as we do it we’re blessed. Thank you Lord, in Jesus Name. Amen.

You cannot leave this class without receiving Jesus. It is when you accept him that you start the journey to doing the works of Jesus and doing greater works.

Say Lord Jesus, I come to you today. I’m ready to receive you as my Lord and saviour. I repent of my sins and I forsake them. I ask that you forgive all my sins. I receive your forgiveness and I’m cleansed with your blood. I accept you as my Lord and Saviour. My name is written in the book of Life. Thank you for saving me. In Jesus Name. Amen.

Congratulations. Let’s meet again in the next class, by God’s grace. Amen.