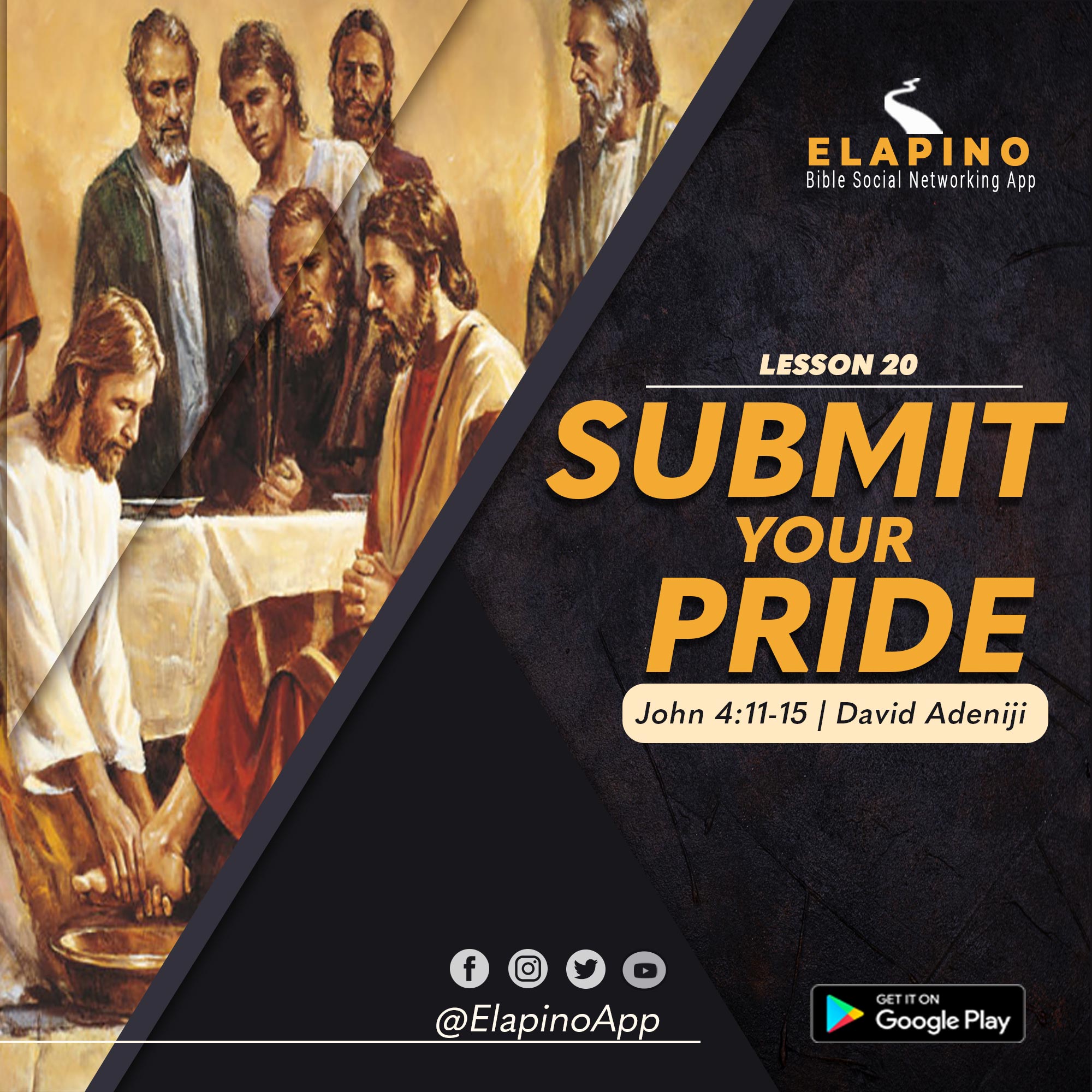 It doesn’t matter how much it took you, or what it took you to build what you have now. If God is saying, I want to make use of it, then so be it, you have to give it to him.

It doesn’t matter how much you earn for your time, If God says give me part of that time, then He means it, because what He will give you in exchange will be far more than that which you can work for.

In the last class, we started with another sub series – Give me to drink. In this class, we will be looking at the second objection the Samaritan woman gave when Jesus asked her for a drink.

Many thanks for joining the class once again. We continue with our series titled Come, Drink. We opened another sub-series in the last class titled – Give me to drink.

In the last class, we looked at the first objection the Samaritan woman gave when Jesus Christ asked her to give Him a drink. Imagine God himself asking a human to give him a drink. When God asked us for something, not that He really needs that thing, He just wants an occasion to bless us. Do you know that when you sow, or give money, God does not need your money, in terms of the meaning of ‘need’. He does not need your money. He just wants an avenue to bless you, because the word of God has to be fulfilled, that as long as the earth remains, seed time and harvest will not cease. (Gen 8:22)

He’s asking the Samaritan woman to spare some part of Her hope of survival. In the next classs we’re going to see a parallel of the Jesus this episode. It’s the story of Elijah and the Widow of Zarephath in 1 Kings 17 from verse 10. God had commanded Elijah to go to Zarephath.

1 Kings 17:10-12
[10]So he arose and went to Zarephath. And when he came to the gate of the city, behold, the widow woman was there gathering of sticks: and he called to her, and said, Fetch me, I pray thee, a little water in a vessel, that I may drink.

Here, we see a scenario similar to that of the Samaritan woman in John chapter 4. Water is also involved. The Widow of Zarephath, was asked to give her only hope of survival. We will dig deeper into this in the next class.

Let’s look at that second objection given by the Samaritan woman, after Jesus had crushed the first one, where she queried that Jews and Samaritans have no dealings. That, we find in John 4:9. In the last class, we also saw the seemingly genuine reason behind that objection. It’s because, Samaria was conquered by an Asyrian King (around 721 BC) who deported the inhabitants of the city to Assyria and then imported Assyrians Samaria to live there. So it became a kind of mixed culture and the Jews began to look at the people in Samaria as half Jews and Half gentiles. We then concluded that it doesn’t matter how genuine your excuses are, they shouldn’t make you lose the blessings God has for you in return. Jesus Christ advised her to me mindful of the kind of person He is and take advantage of that by asking for the living water.

Anyway, that brings us to the second objection. The Samaritan woman proceeded with another objection.

“You don’t even have anything to fetch with, and the well is deep. Yet, you’re talking about living water. With what do you inyend to fetch that living water?”

John 4:11
[11]The woman saith unto him, Sir, thou hast nothing to draw with, and the well is deep: from whence then hast thou that living water?

Everytime we deny God of that which He’s asking of us, it’s because we have little or no understanding of His depth. It’s because we don’t understand what who He is and What he’s capable of. Many of us have not come to the full understanding and realization of the power of God. We still feel that we can help or healourselves. You feel you can set yourself up. People say “my Business need a boost, I need to be insured I need a loan, etc. Loans and insurances are good, but they should not erode our trust level and priority in God. Every good and perfect give comes from above, from God the Father of lights, the one with whom there’s no variableness, neither any shadow of turning.

If only we can take all of our efforts as secondary and God’s gifts to us as primary. If only we can secure his grace, favour and all that He has to give to us first, that’s when every other thing we do, will be in line with his will. Bible says trust in the Lord with all your heart. Do not lean in your own understanding. In all your ways acknowledge him, and He will direct your path. Many times, we conclude on our plans and understanding and then present them to God for ratification. That’s both rude and wrong!

The second objection this woman is giving Jesus Christ is that where will He get the bucket to fetch this living water He’s talking about. She’s obviously getting it wrong, thinking that, that living water the Lord is talking about is inside the well. It’s the same mistake many of us make. When God says “I will build you a city”, you begin to look at your bank account. And say “how much is my salary”. When He says you will have your own children”, you remember the doctors report that says your womb is weak or that you and your husband have infertility issues. Sarah thought the same way. When the angel prophesied that her baby will come in a year’s time, she looked at the deadness of her womb and laughed. “How will that happen? How will I carry a child” she even denied laughing.

When you read a scripture. When the Bible says “I’m the one who teach you to make profit (Isaiah 48:17), you laugh and say, “But I’m already making loses, on the verge of closing shop.”

Many times, when God promises us, instead of believing, based on his power and the testimonies we have of him, we try to calculate the possibility of his promises with the existing resources and current circumstances. That’s not good.

Jesus encouraged the samaritan woman to ask for something more worthwhile, the living water, instead of objecting to His request for a seed. The woman chose rather to judge Christ’s providence-ability based on the physical well they both met. It doesn’t matter where God meets you, It’s certain He won’t leave you where He met you. Who are we to question God’s ability?
May your education and intelligence or skill not be a barrier to your miracle. So when God speaks, just say so shall it be.

Isaiah 43:19
[19]Behold, I will do a new thing; now it shall spring forth; shall ye not know it? I will even make a way in the wilderness, and rivers in the desert.

When the samaritan woman queried Jesus that He had nothing to fetch with, I’m sure the saviour would have smiled. It’s amazing at times, how humans challenge God. Take another look at that scripture. The woman even reminded Jesus that the well is deep. Meaning, he should not even think of fetching without a fetching bucket. Meaning, if He tried that, his hands will not be long enough to collect any water. Sounds funny. Right. Please pardon the Samaritan woman, she has no idea who she’s talking to. Do you even have a sufficiently magnified sense of who God is? He’s almighty.

Unknown to the Samaritan woman, God has long hands, longer than she imagined. Bible confirms in Acts 4:30 that he stretched forth His hands to heal and perform signs and wonders. So once again, this woman is wrong!

So, the next time you tell God that your problem is big, remember that Your God is bigger. Don’t even begin to tell us we don’t know what you’re going through. Just accept this charge. God knows and he’s ready to save.

Yet another objection from the Samaritan woman. Now, she wants to take pride in her ancestors.

John 4:12
[12]Art thou greater than our father Jacob, which gave us the well, and drank thereof himself, and his children, and his cattle?

But our God is the chief objection crusher. Today, he will crush every objection against your miracle, presented by the devil or by you, in Jesus Name.

John 4:15
[15]The woman saith unto him, Sir, give me this water, that I thirst not, neither come hither to draw.

Finally, she surrendered and thereafter, answered all of Jesus’ questions without arguement. This is the place he wants to brng you to. I pray you will get there in Jesus Name. When you do, your miracle is sure.

He’s the living water, and when you drink from Him, you’ll never thirst again. Surrender your pride, accept him today, if you haven’t.

Say Lord Jesus, I surrender to you. I repent of my sins and I receive your love and forgiveness. I accept you as my Lord and Saviour. Thank you for saving me. In Jesus Name. Amen. Congratulations and welcome to the Kingdom of God.

Let’s meet in the next class by God’s grace. Amen.