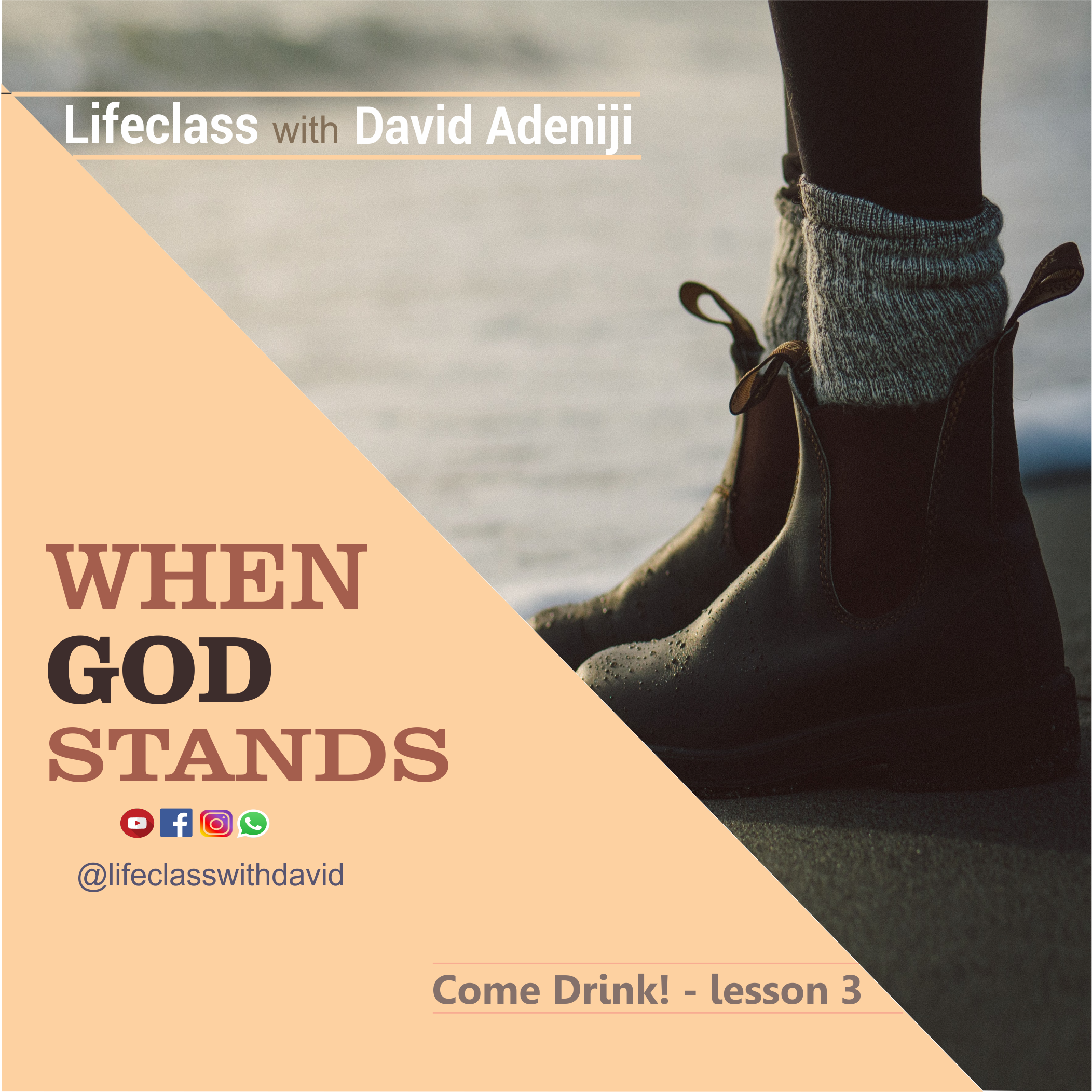 In the last day, the great day of the feast, JESUS STOOD, and cried with a Loud voice, if any man thirsts, let him come unto me and drink. John 7:37

I’m David Adeniji, and our Theme is: Come, Drink –

So, what happens when God stands. We will look at three examples for today.

That scripture in John 7:37 suggests that Jesus was initially in a sitting, or relaxed position. It could also be the readjusting body movement you make when you want to say something profound or defining.

In this case, he had to stand. He wanted to tell them something that could perhaps be hard for them to comprehend. Hence, the need to make them see the seriousness of it.

He knows it was a feast of tabernacles and that what they’ve come essentially to do at that feast was to celebrate the water breaking event that happened when God used Moses to bring out water from the rock.

Therefore, when God stands, there’s a revelation that breaks from him, and you can be sure that obedience to such instruction will always make you a changed person.

Because in verse 38 of that John 7, we see that, that which we drink from Him, which is His word, becomes Faith in us, we believe and what happens next is that, that faith in us becomes rivers of living waters such that we become a channel through which grace flows to others. That’s a revelation. you know? It happened because Jesus Stood and pronounced. It is what happens anytime You provoke Him to stand in you or through you.

I GO TO THE SECOND EXAMPLE NOW. WHAT HAPPENS WHEN GOD STANDS?

When God stands, of course you know that heavens stand with him. In expectation and awesome reverence, to carryout his next instruction or command.

In Mark 4:35-39, we see an example of Jesus Standing up. He and the disciples had set sail to the other side of the sea of Galilee. Jesus had had a long day and was sleeping. The storms came in the middle of the sea and this is not an unusual occurrence in the sea. But I believe the disciples relied on the fact the’re professional seamen in their midst. I mean of course, Peter, James and john were fishermen, and they should know how to handle this.

But perhaps, the biggest confidence they had in taking such a journey is the fact the Jesus the miracle worker is their master. And he’s right there with them. As a matter off fact, He summoned the journey. It was his command. Wherever God has not sent us, may we never go there. If He sends you on an assignment, rest, assured that he will be with you. Where we run into prolonged troubles is when He didn’t send us in the first place. God calls everyone to his work, but has separate stations for each person.

For example, ministry is for everyone, the great commission to go ye and preach the gospel is for everyone. But even Jesus told the disciples not to go out until they have received power from on high. He told Apostle Paul in Acts 16 verse 9 to go to Macedonia on an evangelistic but rescue mission.

If you care to ask him, he will tell you where he’s leading you and who he’s sending you to. But If you ask him for direction and you don’t appear to hear, see or have any leading, don’t be discouraged and don’t get lazy, just keep doing what you know is right to do and keep asking him. Don’t stop working because you think He’s not leading you. Keep moving, keep preaching, keep doing that business, keep giving, and keep growing your circle of influence, but never, stop asking for leading. Set aside time to get closer and deeper with him. Fast if you have to. Actually, fasting increases your reception. It really does. I’ve tried it severally and light has broken through prayer and fasting, holding onto God’s promises.

Now, let me return to the disciples in the boat. The trip they were on, is one that was commanded by Jesus. They have seen his miracles, and they know He cannot be in the boat and they drown. It’s not possible. But despite that assurance, the storm came and their boat was already filled with water. Please check Mark 4:37 to see that. Ordinarily, they should sink. But where is Jesus, the captain of the ship? The commander and commissioner of the mission. He appears sleeping in the bunker of the ship. He even has a pillow under his head. Oh, what peace we have, even in the midst of turmoil, when we know who we are, when we know the God who is with us.

CHECK THIS OUT: in Psalms 121 verse 4, Bible says the keeper of Israel, God Himself, neither slumbers nor sleep. So, scripture is clear that God never sleeps, but Jesus appears sleeping here. As a matter of fact, in verse 3 of that Psalms 121, Bible says, He will not let our feet be moved, He will not slumber, let alone sleep. The disciples’ feet is not only being moved here, in fact, it’s already soaked with water, because the water has already filled the ship.

So, perhaps the disciples were left aghast. This wonder man, the one whom we have followed, this supernatural being, is not only slumbering, he is not just having a quick nap, he has a pillow on his head, he’s fast asleep, despite the raging storm. Wait a minute, did you actually see this? Bible says, in Mark 4:37 that the boat was already full of water and hence about to sink. And Jesus was lying somewhere in the boat, fast asleep. So it’s not impossible that water has flowed into his bed, yet, he was at peace.

I think the disciples had a problem seeing that they were the ones sleeping. They had a sleeping faith. Jesus knew there was a storm, yet, he was asleep, because He’s God all by himself. Hallelujah! He created the storm, so, he can sleep inside it, so can you, when you’re in Jesus. He created water, so he can sleep inside water when the boat got filled with water. Hallelujah! Little wonder, after he rebuked the storm, He addressed their sleeping faith. He said, how is it that you had zero faith. Sleeping faith is no faith.

But we’re not even there yet. Our topic says when God Stands. In verse 39, Bible says, Jesus Arose, and rebuked the wind, and said unto the sea, peace be still. And the wind ceased, and there was a great calm.

So see what happens when God stands

When God Stands, Storms vanish, as if they never came. When God stands, there is peace, when God stands, everything obeys, they stand still in obedience to his command. That’s happening in your life right now, because by this proclamation, God is standing on your behalf, in Jesus Name.

BUT YET ANOTHER EXAMPLE Let us see a third episode of what happens when God stands.

When God stands, then it means something remarkable, a miracle is about to happen When Bartimaeus the blind shouted as Jesus passed by in Mark 10:47-49, Jesus stood still in verse 49, and what happened next was healing for the blind man..

Now, take a moment and look at that closely. Bible says, Jesus stood still. In the example of the disciples on the stormy sea of Galilee, Jesus had to be woken up from sleep, to calm the storm and save them from death. But here Jesus wasn’t even sleeping, he was walking. So, it means He stopped moving and paid all his attention to the blind man’s cry. That’s what happens when God stands. All forces in heaven and on earth are forced to stop and attend to what God is paying attention to and saying about you, with a mandate to get His will done. Hmmm

Today, God will stand for you, in Jesus Name. And you can be sure that when he does, everything spiritual or physical, waits for his next utterance and command, just to make manifest his pronouncement in your life. In Bartimaeus’ case, it was healing for his eyes, but in Psalms 68:1…When God stands, it is explosive for the enemy and joy for the righteous.

Let God arise, let his enemies be scattered: let them also that hate him flee before him.

2 As smoke is driven away, so drive them away: as wax melteth before the fire, so let the wicked perish at the presence of God.

3 But let the righteous be glad; let them rejoice before God: yea, let them exceedingly rejoice.

There you have it.

BUT WHAT PROVOKES GOD TO STAND ?

Simple, the answers to this question for this class, are found in our three examples.

Beginning with, John 7:37, where Jesus STOOD and cried with a loud voice. what provoked ,him to stand and make that revelational pronouncement started in verse 34  where He had said,

Ye shall seek me, and shall not find me: and where I am, thither ye cannot come

The people became curious of this statement, they wanted to know what he meant. They said what manner of saying is this? We don’t know the genuineness of their curiosity, but whenever you get curious about understanding what God us saying to you at anytime, you provoke him to Stand, and break more light on issues at that time. God stands when we get closer to him and dig to know things which are hidden. Bible says in Jeremiah 33:3,

Call unto me, and I will answer thee, and show thee great and mighty things, which thou knowest not.

This exactly is the case with the disciples in Mark 4:38. Even though they were they terrified, and they lacked faith, they didn’t go committing suicide or jumping into the sea, or resort to self help, they called upon the saviour, and he answered them. Are you calling in Him today for help? No time is inappropriate to call, even where you have made so many mistakes, just call him, He will answer and Stand on your behalf.

Now, To become curious is to meditate deeply on his word. Never gloss over a scripture that strikes  while reading the bible, or while listening to a sermon or message. Pause to dig deeper, so the Holy Spirit releases to you the full package of what He’s saying to you there.

Thirdly, what provokes God to Stand? In the case of Bartimeaus in Mark 10:47-49,We see that Bartimaeus Cried out for mercy. He said Jesus, thou son of David, have mercy on me.,

Mercy is a “love that responds to human need in an unexpected or unmerited way.” At its core, mercy is forgiveness.

Bartimeaus perhaps understood that his blindness was a result of some sin or the other. Maybe you’re hearing this and you also want God to Stand for You, and you’re also asking for God’s mercy. Truth is, He loves you, but is sin separating you from him. Can you sincerely say you love him. Do you have Jesus, are you commited to a relationship with him. I’m inviting you to a new life. If you ask for mercy like Bartimeaus sis, he will heal your spiritual or physical blindness. He will stand still and command your healing from any sickness, barrenness or frustration. He really Loves you.

So, everyone, keep spreading God’s love. Tell people about the Elapino App, download it on your phone today and drink from the stream of Gods Word. Until next time, when I come your way, by Gods grace, Bye for now.